You Are Here: E.ON ERC Newscast on ISPRA Symposium

Prof. De Doncker and Prof. Monti were invited to the International Symposium "Towards A Transatlantic Emobility Market - Vehicles and Grids of the Future", which was organized in Ispra, Italy by the Joint Research Center of the European Commission. 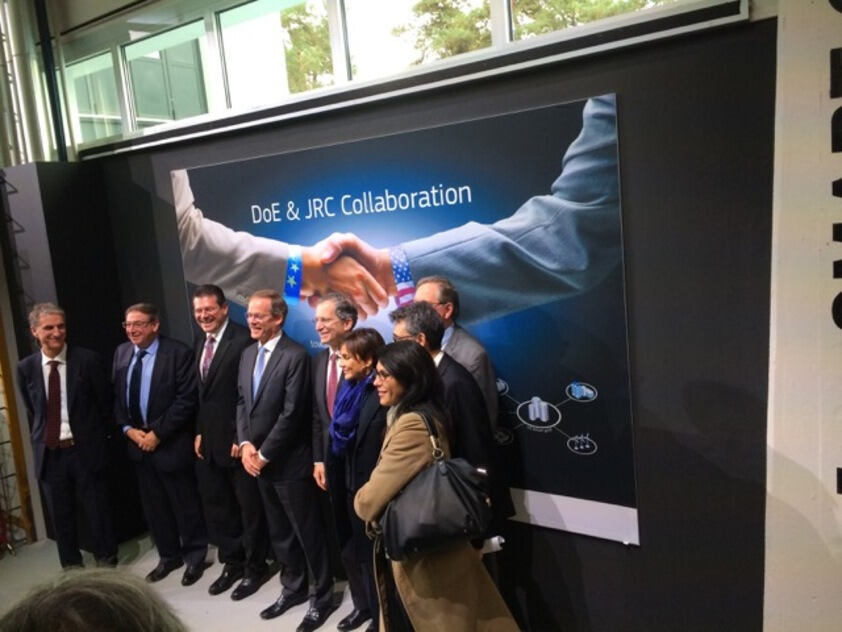 The US Department of Energy and the EC Joint Research Center (JRC) established two "Electric Vehicle and Smart Grid Interoperability Centers", one at Argonne National Laboratories, Chicago, Illinois and one at JRC in Ispra, Italy and Petten, the Netherlands. Recognizing that large RWTH institutes and centers are working on similar topics, Dr. Giovanni De Santi, Director of the JRC Institute for Transport and Energy, invited E.ON ERC to support the joint US-EU initiative.

At the occasion of the symposium, JRC inaugurated its new European Interoperability Center for Electric Vehicles and Smart Grids. Vice-president of the European Commission for Energy Union, Maros Sefcovic and John MacWilliams, Assoc. Deputy Secretary of the U.S. Department of Energy, and Dr. De Santi officially opened the center, reaffirmed the US-EU cooperation and toured the new test facilities. One highlight, which impressed the distinguished guests, was the real-time simulation and visualization of the impact on the European grid of a sudden cloud shading effect of large PV farms in Northern Italy. The fact that the real-time simulation was performed by four research centers spread across Europe, i.e Petten (Netherlands), Ispra (Italy), Politecnico di Torino and at the institute ACS at E.ON ERC (Aachen), was a unique and first of its kind experiment. "This shows that we have the technology to allow centers across Europe to work together on large and complex problems that need to be addressed in future grids that have a high concentration of prosumers and storage systems" Dr. De Santi explained. Prof. De Doncker emphasized the importance of the real-time intercontinental simulation as a means to share data among all stakeholders across Europe and the United States.

The real-time co-simulation experiment was conducted by the teams of Prof. Ettore Bompard, Politecnico di Torino, Prof. Antonello Monti, E.ON ERC of RWTH Aachen University, with strong support of IREN and Terna. A model of the transmission system of Piedmont Region at 220-380 kV (around 90 buses and 110 lines) was implemented on the RTDS real-time simulator in Aachen, while a portion of the distribution network in Turin (50 buses, 49 lines .. representing 742 mono-phase and 8293 three phase LV customers + 6 MV customers + 4 PV generators) was running on Opal-RT at Politecnico. The real-time co-simulation ran with a fixed 50 microseconds time step, with 24-hour load profiles. The profile data, generated by JRC Petten, includes 96 steps (every 15 min), with increased multi-rate resolution down to 1 second to make the observation and the visualization of transients smooth. The complete scenario was supported by a cloud-based visualization system developed at RWTH E.ON ERC and available at JRC Ispra.